AmadorArts Gallery extends current show through the month of August

Due to the injuries of photographer Justin Allen who was scheduled to be the August featured artist, the AmadorArts Gallery will extend its current show for one more month.  You will still be able to see the works of multi-media artist Marleen Olive and ceramic artist Michele Fisher.
During the 1st Saturday Art Trek on August 5 a reception will still occur between 2 and 5 pm, and the August show will run until the 27th. The gallery is located in Sutter Creek at 11-A Randolph St. Hours on weekends are 11:00 am to 4:00 pm.


The next exhibit starting September 2 will be the Preview Show to the Open Studio Tour, presented by the Amador County Artists Association. The AmadorArts Gallery is open during the week, Tuesday through Friday, but it’s best to call ahead because the staff might be out for meetings.


The non-profit gallery is looking for volunteers to greet weekend guests. You do not need to be an artist and you only have to volunteer every now and then. Call 209-267-9038.


Posted by Carol Harper, Community Media at 11:58 AM No comments:

It’s Salem, Massachusetts, 1692. The girls of this small, devout town, under the malign spell of their ringleader Abigail Williams, accuse countless decent people of witchcraft. Gradually it becomes clear that Abigail has her own motives for revenge, as fear and injustice rip apart the village.  Arthur Miller’s explosive account of the famous Salem witch trials caused a sensation when he wrote it in 1953, with its parallels to the Communist scares of the 1950s, and it remains one of his most enduring classics. It has the intensity of a thriller, but is also a cautionary tale of extremism that can lead to dangerous mass hysteria. The Crucible runs August 11th – September 9th. 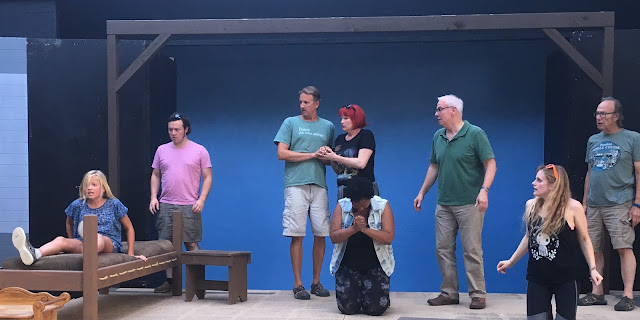 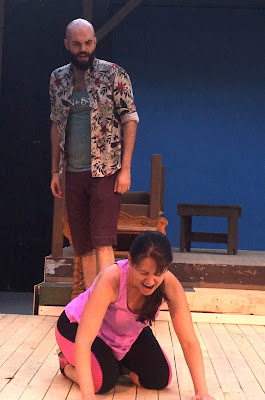 Main Street Theatre Works is a professionally oriented theatre company, performing in the heart of Amador County. Now entering its 23rd season, MSTW continues to be dedicated to bringing professional and community theatre artists together to produce classical and contemporary plays, striving for a balance that stimulates both artists and audiences.

The setting for the amphitheatre is truly spectacular. Located on the Kennedy Mine property, patrons walk past an old tailing wheel (used when the mine was in operation), across an old bridge, into a grass-covered, terraced bowl, surrounded by majestic oaks. There the stage is set for picnicking and enjoying professional quality productions. You are truly sitting on a gold mine, enjoying theatre under the stars.

Tickets available at the gate, Hein & Company in Jackson or on-line at
www.mstw.org 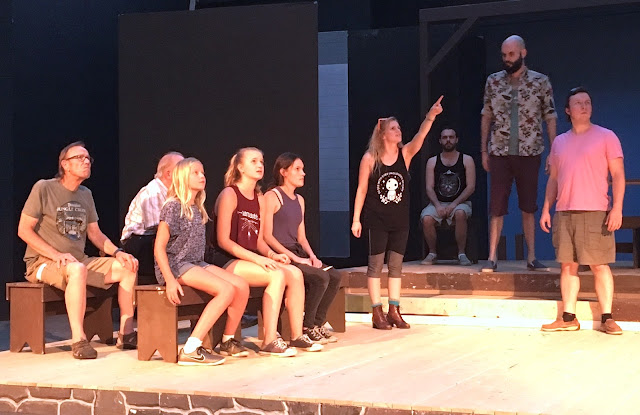 Posted by Carol Harper, Community Media at 11:34 AM No comments:

The AmadorArts’ TGIF summer concerts heads upcountry to Pioneer and the Mollie Joyce Park on Friday, August 11. Featured that night starting at 6:00 pm will be Debbie Wolfe & Halfmoon Highway.  This 4-person band showcasing Debbie Wolfe’s heartfelt vocals has delighted and enchanted audiences throughout the U.S. with a distinctive blend of Americana, bluegrass, and old-time country.To reach Mollie Joyce Park, turn off Highway 88 in Pioneer oton Carson Drive opposite the post office. Turn left on Woodfern Drive, and the park will be on the left.


The band’s original compositions are filled with a charm and melodic style that is reminiscent of the Appalachian tradition. With years of experience, amazing harmonies, and exceptional musicianship, this band will provide a highly entertaining show for this next to the last TGIF concert.

The band is comprised of Debbie Wolfe (lead vocals/songwriter), JW Wolfe (guitar/songwriter), Russ Abraham (mandolin/banjo/guitar), and Jesse Guerra (bass). “My Hometown” album was released early in 2015 by Wolfsong Music. They are currently in the studio recording their second album, titled, “Love Don't Come Easy,” which is scheduled for release in 2017.


AmadorArts, a non-profit public benefit organization in the county for 35 years, is proud to bring these free concerts to the parks of Amador County, as it has for 19 years.  Next Friday, August 18, will the finale of the season. The event at Terra d’Oro Winery will feature music by Jeramy Norris & the Dangerous Mood and the presentation of the annual Patrons of the Arts Awards.  For more information, call 209-267-9038or visit www.amadorarts.org
Posted by Carol Harper, Community Media at 3:39 PM No comments:

Kit Carson Lodge invites YOU….
TO COME and PLAYFULLY CREATE
A UNIQUE MONOTYPE ART PRINT
WITH NOTED ARTIST KATHERINE VENTURELLI
WHO: All ages, all levels and be ready to experiment
WHERE: at Kit Carson Lodge’s ping-pong table area
WHEN:  July 23 , Sunday, 1 0 :30 –  1  pm.
It's a fun art process!
You can also enjoy having lunch on the  lodge's deck. 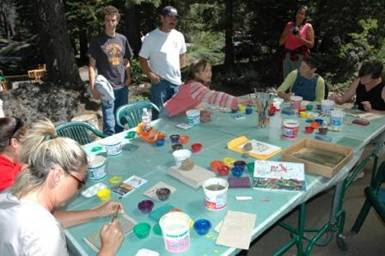 Posted by Carol Harper, Community Media at 12:35 PM No comments:

The AmadorArts’ TGIF summer series heads to Pine Grove on Friday, July 21. Featured that night starting at 6:00 pm will be the Wicked Sisters who are three Amador teacher friends, Tami McBroom, Lynn Vasquez, Anne Jeffries, plus Harry Briggs rounding out the four-part harmonies the group creates. They also share their instruments which include guitar, ukulele, mandolin, percussion, and flute.

Around the region since 2007, the band is known for their feisty and edgy side and play acoustic folk, pop, country and blues, both originals and covers. Give this homegrown fun group an Amador upcountry welcome.

The FREE concert starts at 6:00 pm, but many arrive earlier to these TGIF free events to secure their spots, bringing friends, chairs and picnics. Pine Grove Park is on the south side of Highway 88, next to the fire station.

AmadorArts, a non-profit public benefit organization in the county for 35 years, is proud to bring these free concerts to the parks of Amador County, as it has for 19 years.  Next Friday, July 21, TGIF will be featuring the Church Street Sinners in Jackson’s Kennedy Mine Park, just a half mile off Highway 49, turning by the Linda Vista Motel. For more information, call 209-267-9038 or visit: www.amadorarts.org

Posted by Carol Harper, Community Media at 7:02 AM No comments:

Please come meet the artist's at the opening art reception of
"What Can I Do With an Old Book?"
Friday, July 21, 5 to 8pm.
While viewing this unique exhibit, you will hear the music of Herb Boxhorn and enjoy some tasty treats!
Invite all your friends...
Little City Studio & Gallery
Main St.downtown Amador City
For more information: 209-256-0781 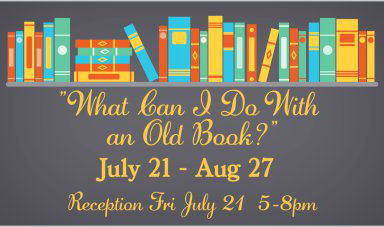 Posted by Carol Harper, Community Media at 2:58 PM No comments:

The AmadorArts’ TGIF summer concerts head to the Kennedy Gold Mine Park (NOT the Amphitheatre) in Jackson on Friday, August 4. Featured that night starting at 6:00 pm will be The Church Street Sinners. The Kennedy Gold Mine Park is shady with a green lush lawn. The elevated stage has a backdrop of historic red brick. Turn off of Highway 49 by the Linda Vista Motel and drive down the hill a half mile where there’s plenty of free parking. 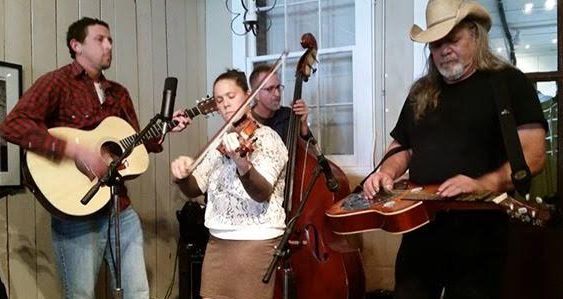 An entertaining mix of co-written original songs and covers, The Church Street Sinners will cool you off this warm August night. Steve Doss is a hard-working bass player who loves Texas swing. Allen Frank is a guitarist and dobro player, and the owner of Drytown Club, the best local spot for your dancin' shoes. Both gentleman work with bands all over the U.S. Bryan Hart sings and plays the guitar and banjo. Sarah Hart, vocalist and fiddler, has a lifelong education in music and culture, intent on honoring the long tradition of rural American music.

Before the concert, if you want to take a guided tour of the historic Kennedy Mine, it will begin at the Change House from 4:00 pm. Adults are $10; kids 6-12 are $6. Also tonight, “burgers and bites” will be available if you don’t want to bring your own picnic. But still bring your own chairs.

AmadorArts, a non-profit public benefit organization in the county for 35 years, is proud to bring these free concerts to the parks of Amador County, as it has for 19 years.  Next Friday, August 11, TGIF will be featuring Debbie Wolfe and Halfmoon Highway in Pioneer at the Mollie Joyce Park. For more information, call 209-267-9038 or visit www.amadorarts.org

Posted by Carol Harper, Community Media at 11:06 AM No comments:

Posted by Carol Harper, Community Media at 1:03 PM No comments: 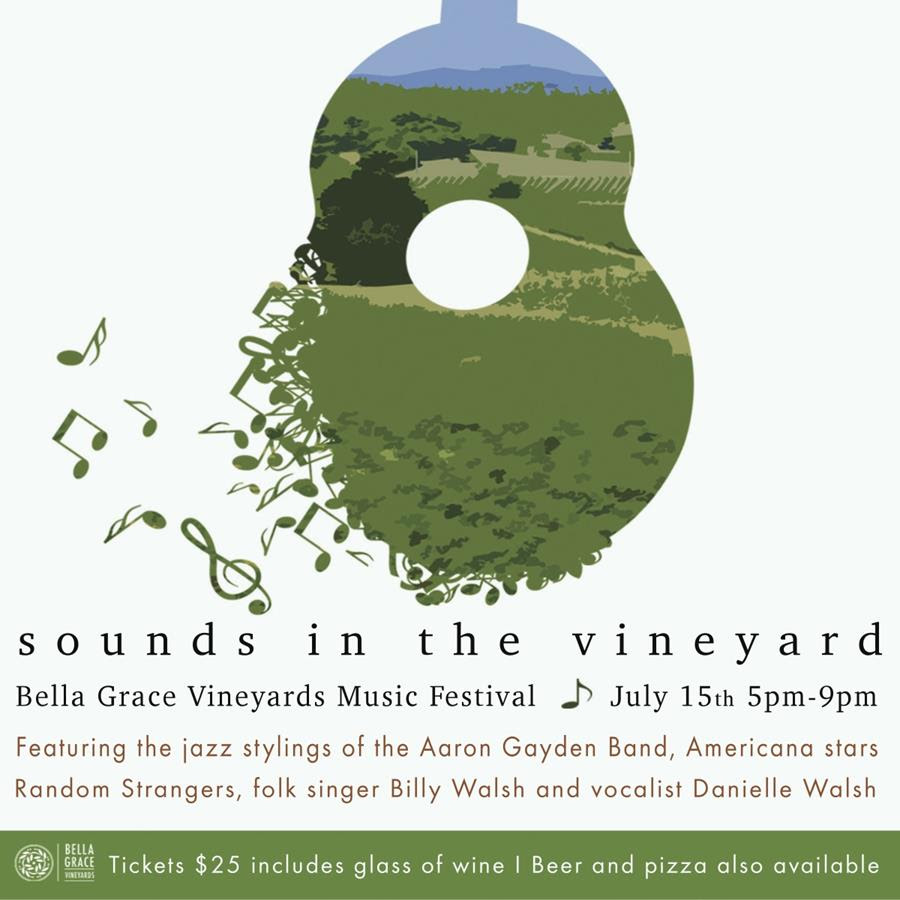 Make it a Bella Grace Weekend!

Join us Friday, July 14th at 5:30pm at the Sutter Creek Tasting Room for a "Sip & Paint" Evening.
Painted Studios of Folsom is coming to Bella Grace for an evening of wine & painting on the patio. Tickets are $50 each. Includes a glass of wine, canvas, paint, and instruction. Picnic boxes from Prospect Cellars will be available for purchase. More information and tickets at www.bellagracevineyards.com

Tweet
Posted by Carol Harper, Community Media at 10:51 AM No comments: