Posted by Carol Harper, Community Media at 8:14 AM No comments: 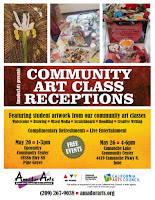 Half the fun of creating art is in the recognition and pride that comes from showing the art to others. That’s why AmadorArts is hosting receptions to celebrate the weeks of creativity participants recently spent learning various art forms, including painting, mixed media collage, drawing, dance movement, creative writing, scratchboard, and doodle art.

The first reception will be held on Saturday, May 20, 1-3 pm at the Upcountry Community Center in Pine Grove at 19386 Highway 88.  The exhibit will include  watercolors, mixed media collage, and creative writing samples.

Another reception will be Friday, May 26, 4-6 pm at the Lake Camanche Community Center at 4240 Camanche Parkway N., in Ione. The exhibit here will include drawings, doodle art, and mixed media.

At both receptions, which are free and open to the public, there will be complimentary refreshments, including locally made cupcakes, and live music by Jake Guidi. Expect to see examples of the work produced, meet participants and their families and some of the local professional art teachers.

Begun this past December and continuing through April, the well-attended daytime classes were held in Ione, Camanche, Pine Grove and Jackson. Teachers were Julie Trail, Judy Day, Christie Lane, Cynthia Dunn-Selph, Meghan O’Keefe, Donna Bohlin, and Linda French.  Administered by AmadorArts, the classes were affordably priced at $5 per session, with the majority of funding coming from a Local Impact Grant from the California Arts Council, a state agency, in order to improve access to the arts for underserved populations in outlying areas.
.

Posted by Carol Harper, Community Media at 4:12 PM No comments:

The Mother Lode Friends of Music, the regional organization of classical music performances, presents its last concert of the 2016-2017 season on Sunday, April 30, at the Pine Grove Community Church, 14045 Ponderosa Way, in Pine Grove.  The concert, starting at 3 pm, is free and is open to the public.

The concert features music for violin, cello and piano of Haydn, Rachmaninoff and Bruno-Videla and the Sonata for violin and cello of Maurice Ravel. Soprano Alexis Magarò sings three songs of Rachmaninoff and  “Dream with me” of Leonard Bernstein, accompanied by piano and cello. 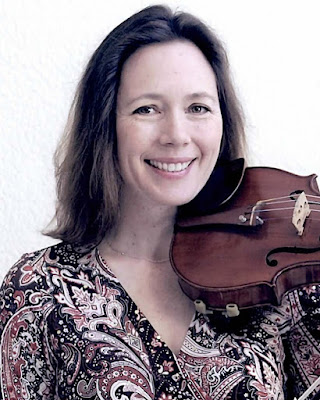 Soprano Alexis Magarò (pictured above), a graduate of UC Santa Cruz, won several international singing competitions before launching a career that led her to star in many of Europe’s most prestigious opera houses and recital halls.  Since re-establishing residence in the United States, she has performed frequently with the Mother Lode Friends of Music, most recently singing the last scene of Capriccio of Richard Strauss with the Orchestra of the Mother Lode Friends of Music in March, 2015.

Cellist Stephanie Chiao, an Oberlin Conservatory of Music graduate, is the founder of the Vivace String Trio and String Quartet. She also has performed with the Divertimento quartet, Les Trois Papillons Trio (the Three Butterflies Trio), the Stockton Chorale, and the Merced Symphony. She was the semi-finalist of the Grace Vamos Cello Competition and a recipient of the young musicians’ scholarship program. In addition to performing, she taught at the Humboldt Chamber Music Workshop, and at the University of Pacific Summer music camp.  She is currently the assistant principal cellist of the Stockton Symphony.

The concert will be followed by a reception honoring the twenty five years of service as President of Ron Brickman, who is retiring at the end of the current season.  All attending the concert are invited.  For more information, go to www.mlfm.org or call (209) 293-4227.

Posted by Carol Harper, Community Media at 9:51 AM No comments: 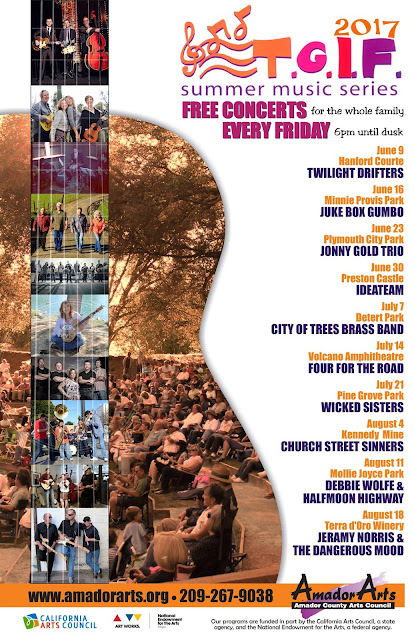 Posted by Carol Harper, Community Media at 7:01 AM No comments:

Children’s Theater Workshop
Directed by Brad Loffswold, this workshop gives an opportunity for children to express themselves and to participate in every aspect of a theater production.
Monday-Thursday, June 5-June 29, 8:30am-12:00pm
The Historic Grammar School in Sutter Creek
$100 for 4 week course
For more information, please contact Paulette at ACRA by Phone (209-223-2300), or E-mail phammond@amadorgov.org 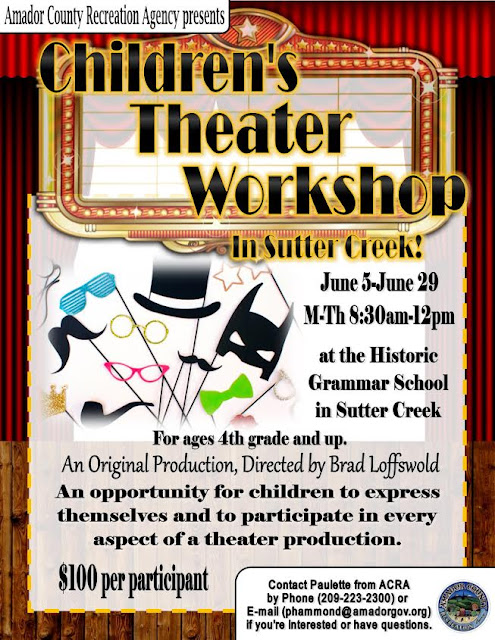 Posted by Carol Harper, Community Media at 6:59 AM No comments:

Adam Swanson is one of the world’s foremost performers of vintage American popular music, including ragtime, early jazz, the Great American Songbook, and more. He holds a bachelor’s in classical piano and a master’s in musicology from the Peabody Conservatory of Johns Hopkins University. 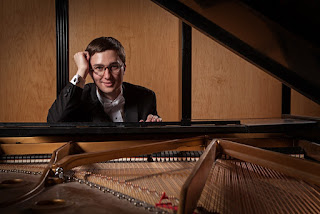 Although he is only twenty-five years old, Adam has been a featured performer and lecturer at ragtime and jazz festivals across the United States, and he is the only four-time winner of the World Championship Old-Time Piano Playing Contest. He made his New York debut in Carnegie Hall at the age of nineteen, where he performed with Michael Feinstein. Adam has performed at the Cinecon Classic Film Festival in Hollywood and the Kennedy Center in Washington, D.C., as well as in Hungary and Switzerland. He has worked with such musicians as Toronto’s John Arpin, former rock star Ian Whitcomb, and legendary 1950s recording artist Johnny Maddox, who is one of Adam’s greatest influences.

Adam performs every summer at the historic Strater Hotel in Durango, Colorado, where he is musical director of the new Durango Ragtime and Early Jazz Festival.

Posted by Carol Harper, Community Media at 8:57 AM No comments: 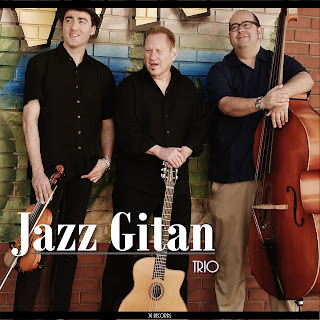 Jazz Gitan is an acoustic jazz ensemble that carries on the tradition of gypsy swing created by Django Reinhardt and Stephane Grappelli during their domination of the Paris jazz scene in the 1930s. Their music is the swinging jazz of the 30s and 40s, plus a cross-section of songs from the modern Gypsy Jazz repertoire and original compositions by lead guitarist, Don Price. It includes Latin, blues, swing, and original styles combined to create a unique foot tapping and high energy Parisian experience.

Pizzas available will range from the Bianca with chevre, mushrooms, wilted greens and spring onions($15) Pepperoni with Arugula ($16) and House Made Sausage and green olives ($16).   A variety of small plates like Marcona Almonds, Mixed Olives and Artisan Cheese and Charcuterie plates, organic salad and dessert will be served.  The event is zero waste.

Posted by Carol Harper, Community Media at 8:18 AM No comments: 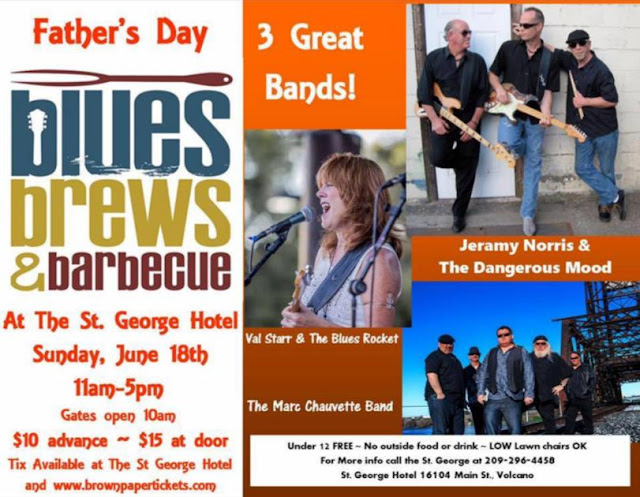 Posted by Carol Harper, Community Media at 11:19 AM No comments: