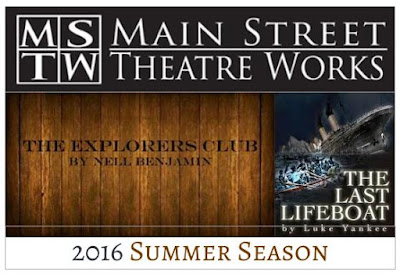 Adventure abounds with “The Explorers Club” and “The Last Lifeboat”

Jackson, CA  (November 21, 2015) – Main Street Theatre Works (MSTW) is pleased to announce its 2016 Summer Season at the Kennedy Mine Amphitheatre in Jackson, starting with The Explorers Club, by Nell Benjamin, a comedic look at Victorian adventurers who ponder the mysteries of science and nature, while genteelly getting blotto. It’s 1879 and London’s prestigious Explorers Club is in crisis: their acting president wants to admit a woman, and their bartender is the worst. True, the female candidate is brilliant, beautiful, and has discovered a legendary Lost City, but the decision to let in a woman could shake the very foundation of the British Empire. And how do you make such an important decision without a decent drink? Time Out NY raves, “. . .the most impressive act of mixology belongs to playwright Nell Benjamin, whose comedy recipe goes a little like this: two parts Blackadder, one part Monty Python, a dash of Shaw, shake wildly and garnish with fresh feminist ire."
The Explorers Club runs June 24th - July 23rd.

Rounding out MSTW’s Summer Season is Luke Yankee’s The Last Lifeboat, a fascinating look at the drama behind the sinking of the Titanic. At his father’s deathbed, J. Bruce Ismay vowed to take over the family shipping business and build the biggest ship the world had ever seen, the RMS Titanic. As the mighty ship sank, Ismay saved as many people as he could, and with no women and children in sight, Ismay stepped into the last lifeboat, a decision that precipitated one of the greatest scandals of the 20th century. This epic tale explores not only the tragedy of the sinking of the Titanic, but the sensationalized trial and aftermath of one of the world’s greatest disasters.
“Luke Yankee has written a surging drama that is riveting, dramatic, educational and entertaining all at the same time. The Last Lifeboat is destined to become a theatre classic!" ~ Rex Reed.
The Last Lifeboat runs August 12th – September 10th.

Main Street Theatre Works is a professionally oriented theatre company, performing in the heart of Amador County. Now entering its 22nd season, MSTW continues to be dedicated to bringing professional and community theatre artists together to produce classical and contemporary plays, striving for a balance that stimulates both artists and audiences.

The setting for the amphitheatre is truly spectacular. Located on the Kennedy Mine property, patrons walk past an old tailing wheel (used when the mine was in operation), across an old bridge, into a grass-covered, terraced bowl, surrounded by majestic oaks. There the stage is set for picnicking and enjoying professional quality productions. You are truly sitting on a gold mine, enjoying theatre under the stars.

Tickets available at the gate, Hein & Company in Jackson, or on-line at
www.mstw.org


Posted by Carol Harper, Community Media at 6:04 AM