A free concert will be presented by the 45-member Amador County Concert Band under the direction of Steve Chambers and Irv Gidding on Sunday, October 11 at 3pm. The program will be held at the Community Church of Pine Grove, 14045 Ponderosa Way, Pine Grove.

Featured music will be a medley from “Bond, James Bond”, transcribed for concert band by Stephen Bulla. This arrangement features the themes from some of the best 007 movies. Another special medley called “House of Horrors” features familiar themes from many of the old scary movies and cartoons we grew up watching! An arrangement called “Rocky and Bullwinkle Strikes Again” has melodies from the cartoon series that are a joy to listen to. Saxophonist Robert Bourke will be featured on a John Krance arrangement of “Harlem Nocturne”. Irv Gidding will conduct the theme from the movie The Alamo called “The Green Leaves of Summer”. Add a couple marches to the mix and we have a very fun afternoon of musical selections to come listen to!

The Amador County Concert Band proudly represented Northern California in June 2010, when it was selected to perform in Washington D.C. for the National Community Concert Band Sousa Festival, a salute to the legendary march king, John Philip Sousa. Under former musical director Ernie Kapphahn, the band gained very high recognition and since the band’s return, has gained new members, some traveling from as far away as Sonora, Placerville, El Dorado Hills, Cameron Park, and Sacramento.

The band also was chosen to perform last year at the Golden Gate Park Band Festival in June and played under the recently restored historic band shell. The Amador County Concert Band represented the Northern California area and was one of the largest ensembles to perform over the weekend, receiving superb reviews and a special recognition award for its performance. The band was also invited to perform at Carmichael Park on June 7 at 2pm and performed well!

Join us on October 11th at 3pm for an enjoyable musical experience; bring the family and enjoy the spirited music! Arrive a few minutes early for best seating….ample parking…music begins promptly at 3pm. Visit the band’s website at www.accband.org for additional information or to find out how to join the band. 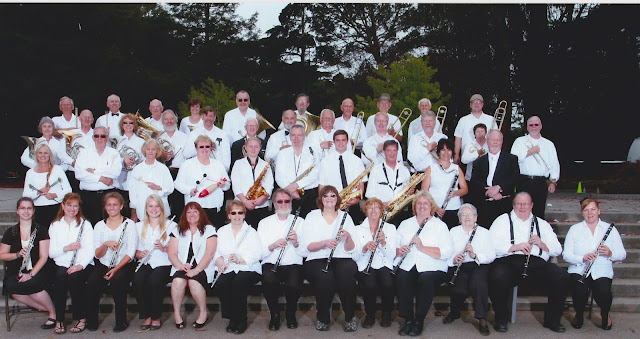 Posted by Carol Harper, Community Media at 7:15 AM No comments:

Posted by Carol Harper, Community Media at 10:41 AM No comments:

Posted by Carol Harper, Community Media at 7:21 AM No comments: