From the Amador Arts Council:
Please review this attachment about artwork that was stolen last Wednesday in Jackson. 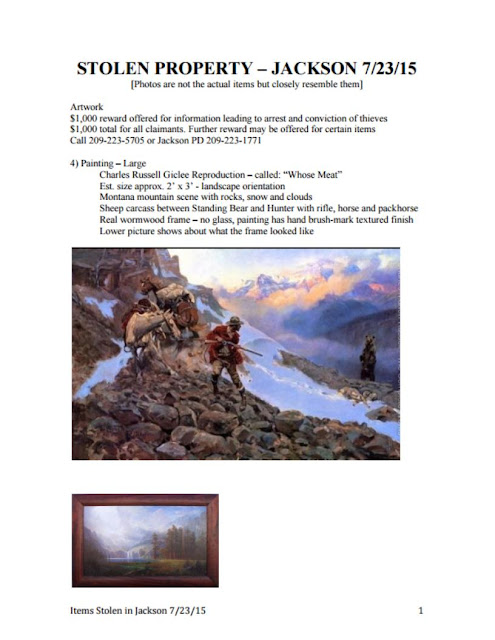 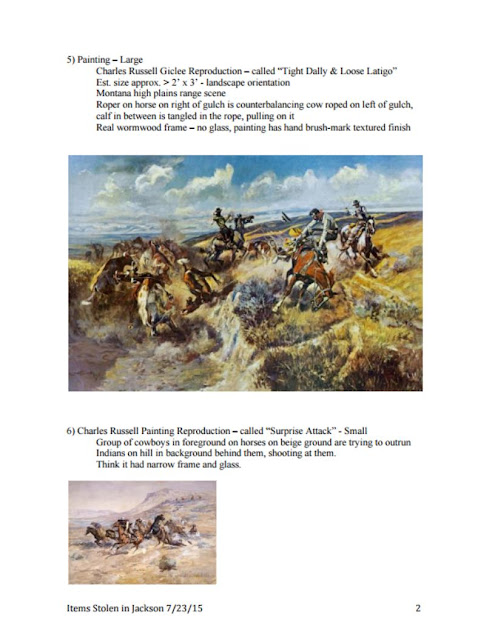 Posted by Carol Harper, Community Media at 7:51 AM No comments:

MSTW: "Vanya and Sonia and Masha and Spike" Come to Jackson - Aug 7 through Sept 5

Jackson, CA  (July 21, 2015) – Main Street Theatre Works (MSTW) is pleased to present Vanya and Sonia and Masha and Spike at the Kennedy Mine Amphitheatre in Jackson.
Playwright Christopher Durang takes themes and characters from Chekhov plays and puts them in a comic blender. Vanya and Sonia and Masha and Spike runs every Friday and Saturday night, August 7th – September 5th. Doors open at 6:30 for picnics; show starts at 8:00pm. Patrons are encouraged to come early with their picnic dinners, chairs and jackets. The Kennedy Mine Amphitheatre is located at 1127 North Main Street in Jackson.

Christopher Durang’s Vanya and Sonia and Masha and Spike received the 2013 Tony Award for Best Play, as well as numerous other industry awards.  It’s a hilarious spoof on several of Chekhov’s best known characters, from some of his best known plays ~ The Cherry Orchard, Uncle Vanya & Three Sisters. But you don’t need to be versed in Chekhov’s work to enjoy this zany comedy. Vanya (Allen Pontes) and Sonia (Georgann Wallace) live in the quiet farmhouse where they grew up in Bucks County, Pennsylvania, but their peaceful life is turned upside down when their movie star sister, Masha (Julie Anchor), returns unannounced with her new boy-toy, Spike (Brian Bohlender). Masha has plans for the weekend, and plans for the old house, but things really get complicated with the arrival of a pretty, much-younger-than-Masha, aspiring actress (Janey Pintar), as well as constant interferance from Vanya and Sonia’s psychic housekeeper (Tara Henry).  “Riotous! The kind of full-on comedy that’s rare on Broadway! It makes you laugh out loud, and repeatedly at that!”  says The New York Post. Vanya and Sonia and Masha and Spike runs August 7th – September 5th.  This play contains some mature language.

Main Street Theatre Works is a professionally-oriented theatre company, performing in the heart of Amador County. Now entering its 21st season, MSTW continues to be dedicated to bringing professional and community theatre artists together to produce classical and contemporary plays, creating a balance that stimulates both artists and audiences.

The setting for the amphitheatre is truly spectacular. Located on the Kennedy Mine property, patrons walk past an old tailing wheel (used when the mine was in operation), across an old bridge, into a grass-covered terraced bowl, surrounded by majestic oaks. There the stage is set for picnicking and enjoying professional quality productions. You are truly sitting on a gold mine, enjoying theatre under the stars.

Performances are Friday and Saturday nights, with gates opening at 6:30, show starting at 8:00pm. Patrons are encouraged to come early with picnics, chairs and jackets. The Kennedy Mine Amphitheatre is located at 1127 N. Main Street in Jackson. For more information go to our website (www.mstw.org) or call 209.295.4499.

Tickets available at the gate, Hein & Company in Jackson, Amador Chambor
or on-line at www.mstw.org 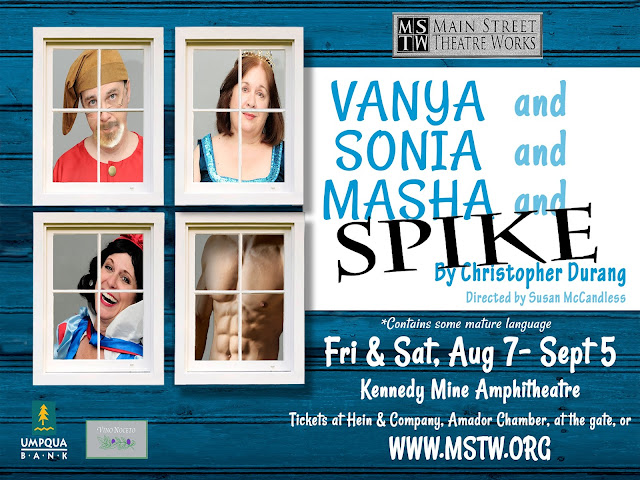 Posted by Carol Harper, Community Media at 7:21 AM No comments:

So by now, most folks know that Dave Holob and I (the founding fathers of our now 4-piece band Over The Edge: www.overtheedgemusic.com), sent an audition video of our National Anthem to the San Francisco Giants and, to our amazement, were selected.
This is a huge honor -- given how many great singers and musicians audition for a coveted spot for one of the home games.
The first of the two videos was shot by our friend Pat Keene, who also shot the audition DVD. How Pat finagled his way onto the field without press credentials is a mystery…left well enough alone! J The audio quality in the first clip is much better and you can really see our facial expressions. Turn up your speakers, make your computer full screen and click here ~
The second video was shot from above and scans the stadium, the flags and the fans. Plus you can hear us being introduced by the Giants announcer, Renel Brooks-Moon. My favorite part is when my daughter’s friend pans around to her face and she is crying (tears of joy -- at the :52 second mark) and when she discovers she is being videotaped, lets out an embarrassed giggle. I love it that Dave’s wife and mine, plus our daughter Jenny, were present for this momentous occasion. So, to see us from slightly further up and back…click here ~
A few days after July 11th… we got a nice note from one of the upper-tiered managers in the Giants organization who said:  "You guys were fantastic. A great and deserved ovation from the fans!"

So please feel free to forward this email with these two videos to your family and friends. Dave and I are so proud of the opportunity we were given and the delivery of our rendition. We hope you enjoy it too!
All best,
Adam
Over the Edge
“Voted Best Band / Amador County / 2013, 2014 & 2015”
Adam Gottstein / Guitar
Dave Holob / Electric Violin & Mandolin
Joe Bellamy / Electric Bass
Allan Alexopulos / Percussion
Please 'like' and 'share' us on Facebook:
https://www.facebook.com/overtheedgemusic44
T: 209 296.7989
music@overtheedgemusic.com 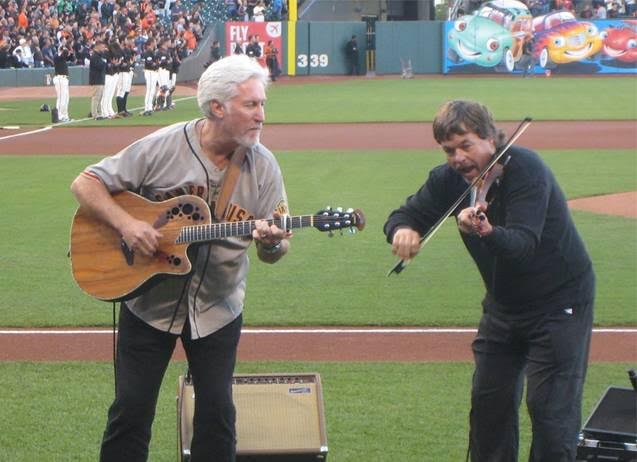 Posted by Carol Harper, Community Media at 8:00 AM No comments:

Mandolin Orange - An Afternoon of Traditionals and Covers
Emily Frantz and Andrew Marlin, together Mandolin Orange, are set to return to Feist Wines on Saturday, July 18 at 7pm.  This show sold out quickly so the duo have added a 3 pm afternoon show which will feature Mandolin Orange accompanied by Josh Oliver for an afternoon set of all traditionals and favorite covers.
The duo was looking for stops on their “This Side of Jordan Tour” and Feist booked them as the winery’s first ticketed concert.  The result was an evening of beautiful lyrical music and the beginning of a string of stellar, sold out Americana concerts at Feist.  This will be their third performance at Feist.

Marlin and Franz met at a local jam in Chapel Hill in 2009 and since have intertwined gospel, folk, and bluegrass.  “American Songwriter” says of them, "Mandolin Orange’s refined, rustic reflections are as thoughtful and sympathetic as their dusky, rural approach”

Feist Wines is a small lot, artisan winery in Amador City and has been producing award winning wine for over three years.  They pour their wines in their tasting room housed in a 19th century western saloon.  Incidentally the room has great acoustics.  Winemaker Tony Feist plays the guitar and fiddle and performs regularly at the tasting room and will open for Mandolin Orange.

All Music says of Mandolin Orange’s songs “Calming, beautiful” and they truly are.  As Willie Watson said of his show at Feist, “it’s banjo therapy.”

Tickets are $25 and are available at the tasting room or at feistwines.com 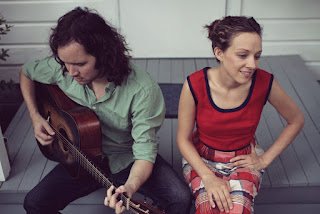 Posted by Carol Harper, Community Media at 8:03 AM No comments:

For the month of August, Sutter Creek Gallery is offering a themed show entitled “Hot August Nights,” in which members of the cooperative will display their interpretations.  A reception will be held on Saturday, August 1, from 4 to 7 p.m., as part of the area’s First Saturday Art Trek.  Whatever the weather outside, it will be cool in the gallery.  Come join us.

August nights are hot and the days are hotter.  Playing in and around the water is welcome on these lazy and lethargic summer days and nights when you feel as though you’ve landed in the tropics.  Members of the Sutter Creek Gallery are celebrating this sizzling month with a show called “Hot August Nights.”
Whether you’re eating hot dogs, slurping ice cream cones, or hanging out at the beach, August is the perfect time to kick back, stay cool, and watch the clouds roll by.  It’s also a good time to stroll through Sutter Creek Gallery to see the unique pieces created by the member artists to celebrate this theme.  A reception will be held on Saturday, August 1, from 4 to 7 p.m., in conjunction with the region’s First Saturday Art Trek.
This cooperative of local artists is located in the heart of Sutter Creek at 35 Main Street.  Besides original paintings and photographs, Sutter Creek Gallery offers many affordable items including prints, cards, jewelry, gourds and fiber arts.  The gallery is open Sunday, Monday, Wednesday and Thursday from 10 a.m. to 5 p.m., Friday and Saturday 10 a.m. to 6 p.m.  For additional information, call 209-267-0228, email suttercreekgallery@gmail.com, or visit www.suttercreekgallery.com.

Posted by Carol Harper, Community Media at 8:32 AM No comments:

The Boot Scootin’ BBQ will be a night of live perfectly-performed country western music by the unequaled Slade Rivers Band, line dancing, a full western-style dinner, a local wine and beer bar, and bocce ball.  On Saturday, August 22, from 7 – 10 pm, herd your friends to the cool, protected outdoor area of the Italian Picnic Grounds, Sutter Creek in Amador County for this annual fundraiser for the arts. Expect cowboy hats and boots, red-checked tables with summertime bouquets.

Tickets, which include a BBQ dinner, one drink, music, line dancing lessons, and bocce ball, if you like, are $40 each.  Buy them on-line using PayPal at www.amadorarts.org.  Or locally you can buy tickets at the AmadorArts Office and Gallery, 11-A Randolph St., SutterCreek; at the Amador Council of Tourism office at 115 Valley View Dr. Sutter Creek; or at any free TGIF concert.
AmadorArts is a 34-year-old non-profit providing much-needed arts programming for schools and the community. The Italian Picnic Grounds (aka Italian Benevolent Society Picnic Grounds) are at 581 State Highway 49 near the intersection with Ridge Road on Sutter Creek.  Info: 209-267-9038. 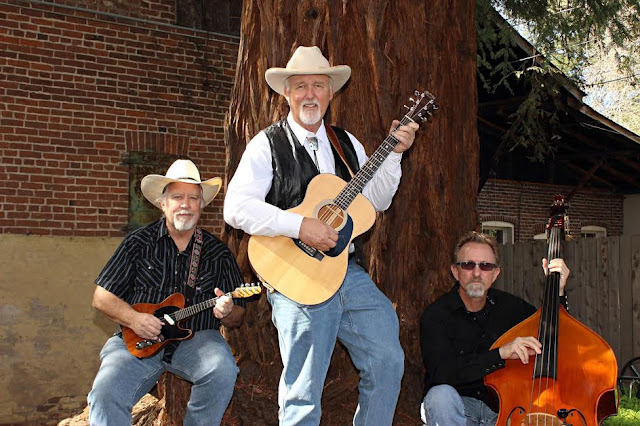 Posted by Carol Harper, Community Media at 8:47 AM No comments: